‘When you come to a fork in the road, take it.’

That’s the mantra of Sue Mahon, LandWorks cook and confidante extraordinaire. She tells us about the journey that brought her to LandWorks.

It’s Tuesday. I open the boot of my car to reveal what to all intents and purposes is a mobile kitchen.

An assortment of pans, dishes, slices, mashers and a garlic press, fill large plastic boxes. A voice behind me says, “Can I give you a hand Sue?”  Another voice joins in, “What are we cooking today Sue?”

My journey to LandWorks began when I became a volunteer with the Samaritans. Part of our work involved supporting the group of prisoners who act as Listeners at HMP Canterbury and it was with some trepidation that I entered my first prison.

I quickly came to realise that the inmates were just ordinary men who had made some bad choices in life. I decided that I wanted to become more involved with these men and so became a volunteer with New Bridge, a charity founded by Lord Longford 60 years ago to support  long term prisoners who had lost contact with friends and family and had no link with the outside world. I now have three ‘lifers’ in prisons all over the country who I write to and visit.

Prison takes away all choices, everything that happens is dictated by authority, so when faced with, ‘more seasoning?’ ‘is it cooked?’ there is a decision to be made by them and confidence visibly grows.

I retired from teaching and decided to follow my other huge passion which is cooking.

I converted a barn in our Kent garden and opened Hommity Pie, a cookery school for young children, teenagers going off to university and children with learning difficulties.

This expanded to men, who for various reasons were faced with cooking for the first time, including a High Court judge whose wife was terminally ill and was desperate to be able to feed their two small children. More than a few tears were shed into bolognaise sauce.

Another fork in the road appeared. New Bridge was looking for two volunteers to run their Family Matters course in a womens’ prison near Heathrow, to help the women maintain contact with their children. It was a huge privilege to work with these often very damaged women, to listen to their stories, to laugh and cry with them.

After 5 years the prison was privatised and we were axed. It was a huge loss to everyone especially as it was the only course in the country which dealt with women first and foremost as mothers.

We moved to Devon and my life took yet another direction when I saw a request for volunteers to help out at LandWorks. I applied and the rest is history. 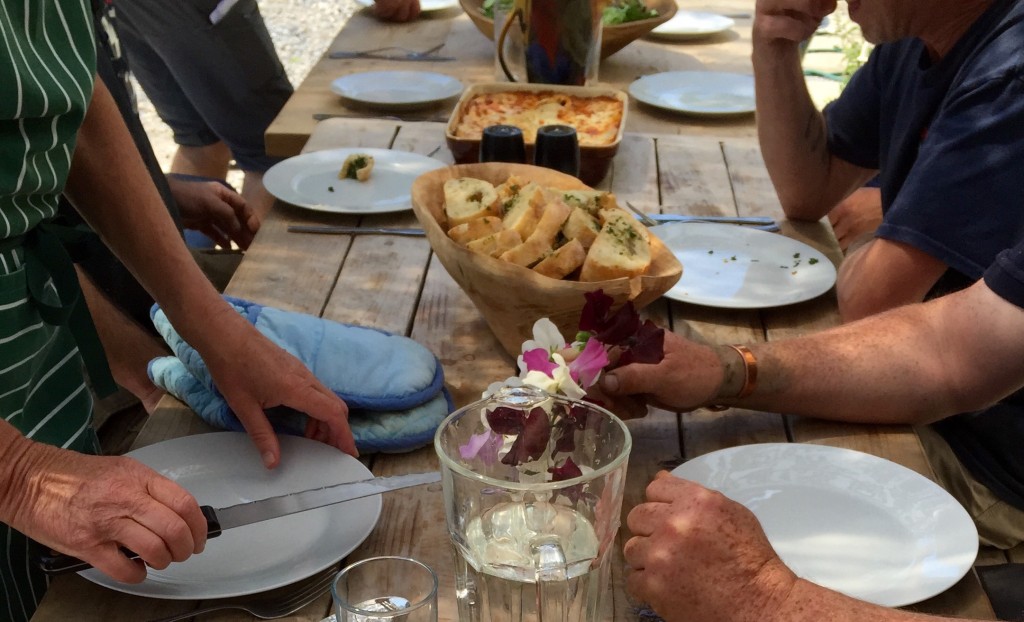 Lasagne and garlic bread made by LandWorks trainees and volunteer Sue

Tuesdays are now days for chopping, slicing, stirring and tasting. It is also a time for listening, talking, building confidence and self esteem.

Prison takes away all choices, everything that happens is dictated by authority, so when faced with, ‘more seasoning?’ ‘is it cooked?’ there is a decision to be made by them and confidence visibly grows.

We chat about everything and anything, partners, wives, life inside, worries and fears. We are equal partners, and we laugh a lot, and some times swear, especially when part of lunch ends up on the floor, but who will know!

But back to where I began.  It’s Tuesday. “How many for lunch Chris?”

No worries, we are up for it!

We use cookies to ensure that we give you the best experience on our website. If you continue to use this site we will assume that you are happy with it.Ok