Friday morning brings the arrival of a newbie. Discovered curled up inside our shop at the field gate. Small, cute and rather prickly, immediately getting loads of love and attention.

Everybody has an idea of what he needs… and if you think about it we all have a unique view on the world, our ‘own terms of reference’.

At LandWorks it’s not the initial picture we see that is important, not our own snap judgements that count, we need to know the whole story about an offender’s life… Then and only then can we begin to work out what is needed and what is appropriate support.

But the real story, the actual story is often hidden under layers of stuff.

Friday morning tea break and a conversation with an addict in recovery. He’s just passed a urine drugs test, clean, no opiate… he’s happy and making plans for tonight. Maybe too happy? It could be this clean test has just opened the possibility of a heroin hit tonight, undetectable because he knows he may just get a clean test on Monday (opiate takes about 2-3 days to leave your system).

A young man is late this morning, his attitude suggests he’s not particularly bothered about his time keeping. React to this or further investigate? He is homeless as of yesterday… no benefits arriving… no money… no food. He spent the night on a friend’s floor in a ‘party house’ so has done well to get here by 10.30am and I decide he’s done well to get here at all, and he’ll learn from our work environment.

Our spikey new friend is suddenly having a house built for him! Cos he’s lovely and cute and it’s so ‘obvs’ that’s what he needs.

An alcoholic in recovery is telling me about the bad men who drink in the churchyard behind his house… he knows they’re bad company, he can’t stop talking about them. But what is he really telling me? Is he trying to say he’s had a drink? 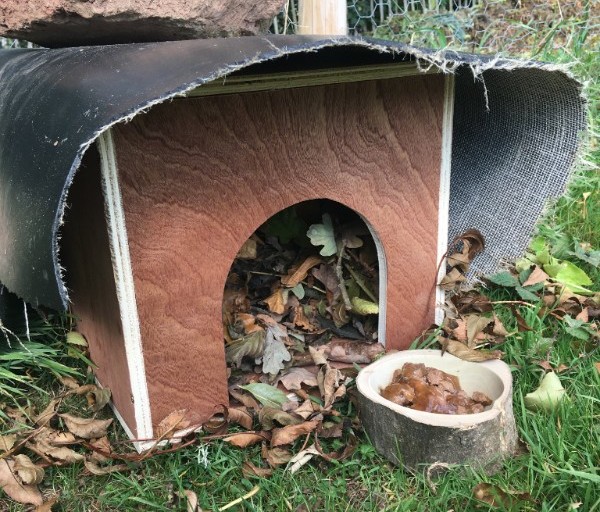 Now Spike is being held aloft… Someone says, “I can tell he’s alright because his pretty little nose is all wet.” Everyone’s an expert. His new house is filled deep with crisp dry leaves and fresh straw.

Another addict in recovery (3 years clean) is talking about how he so nearly used this week, so, so nearly used. I notice his pupils are pinned, he’s talking about the pressure he’s under. I think he’s confessing to me… through the medium of ‘I haven’t used’.  He knows I know.

So, I’ve become this wizened old cynic, unable to see the nice stuff for what it may be…

My task is to dig and scrape to understand someone’s life story, hearing it for what it really is, not what I want it to be or I believe it should be.  I poke and prod through the lies, the incredible deceit that moves around criminal behaviour, the extraordinary resourcefulness and unbelievable mistruths of an addict.

One prisoner asked me the other day “Don’t you get tired of getting shit on… when people let you down?” I didn’t answer, but rarely do I think it’s that personal. I cling to the thought that people in the end do make their own decisions, and our job is to help them make the right ones, break the cycle.

Ohhhh, Spike has also produced some excrement, and everyone seems absurdly delighted. A passing customer at the stall (here to buy vegetables) rummages in her bag, produces tissues and surprisingly a sachet of chicken liver delights for cats and, apparently, hedgehogs. Lucky Spike!

This little chap from the hedgerow hasn’t done much decision making of his own, at least not since he strayed into our shop… He’s been resettled in his warm Hedge Pig house and then relocated to the safety of our market garden. Tucked away snuggly under layers of stuff.

Next day, Spike’s gone. Made his own decision… It’s not actually time to hibernate after all!

We use cookies to ensure that we give you the best experience on our website. If you continue to use this site we will assume that you are happy with it.Ok